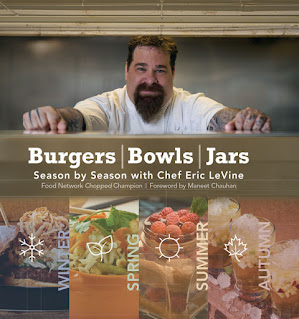 Champion of Food Network's Chopped, Eric LeVine, has chosen Jenkins Group to assist in publishing his new cookbook, Burgers, Bowls and Jars: Season by Season with Chef Eric LeVine. This unique cookbook pays tribute to fall, winter, spring, and summer seasonal palates, choosing the ingredients and flavors that fit each season. Chef Eric has been recognized by the James Beard Foundation for his creative take on American cuisine.
The cookbook's foreword by Maneet Chauhan celebrates Chef Eric's unique approach to the "melting pot" of flavors that Americans embrace. "Eric demystifies cooking in this book, presenting recipes that seem complicated but then are explained in a simple approachable way. He pays respect to the seasonality of food and takes classic favorites to an elevated level," writes Chauhan. His cookbook is both brilliant and accessible, featuring personal stories relating to the foods of the seasons. 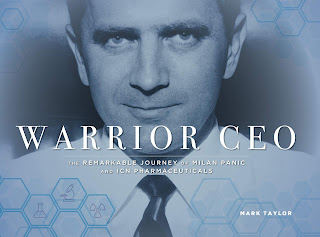 Taylor's expertise is grounded in his long tenure at ICN in numerous executive positions, his seven years on Wall Street as a leading drug analyst, and three decades of experience in the industry. Today he leads a small team of drug developers at Hallux Inc. tackling hard-to-treat fungal disorders.
No comments:

SYNC’d: A Behavioral Operating System, Meeting the New-Era Customer at the Warp Speed of Global Business 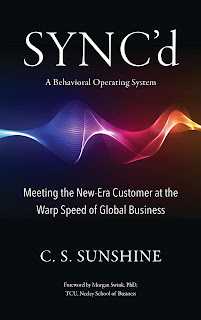 How should a savvy business leader approach the new year? She or he may strategically embrace organizational change amidst the evolving digital era by reading SYNC’d: A Behavioral Operating System, Meeting the New-Era Customer at the Warp Speed of Global Business.

SYNC’d asserts that structural and behavioral change is necessary amidst what may be called the “Third Industrial Revolution.” Jan Heppe, Retired President of Burberry Americas says, “SYNC’D offers a roadmap for the why and how of execution in the new Digital Era.” Sunshine’s “roadmap” involves transforming behaviors that are embedded into the modern workplace.

This new book is ideal for business leaders seeking to meet modern customer demands in a market of rapid technological advancement. Another important business leader comments on how Sunshine addresses contemporary organizational culture. Kevin Knight, Former Head of Consumer Credit and Debit Products for VISA and Chairman, CEO of Nordstrom FSB, remarks, “In SYNC’d, Cathy shares a systematic approach to align modern organizational performance with the new pace of the market.” SYNC’d encourages a variety of leaders to structure their businesses in ways that help them stay competitive in an ever-changing technological climate.

Sunshine's book is now available for pre-order. She offers free shipping and a signed copy of the book to pre-ordering customers.
2 comments:

The 11th Habit: Design Your Company Culture to Foster the Habits of High Performance.

“Habits are not considered sexy,” write Andrew Sykes and Hanlie Van Wyk. “They’re not exciting when stacked against big corporate ideas […] But habits are the gene code of your company.”


Sykes and Van Wyk express the tremendous importance of habits in their new book, The 11th Habit: Design Your Company Culture to Foster the Habits of High Performance. The authors have chosen Jenkins Group to help publish this book, which will take their message to the next level. The 11th Habit will act as a marketing tool—further enhancing the authors’ credibility as leading business consultants.

With more than 25 years of background knowledge, Andrew Sykes is “adamant about helping companies to flourish through the success of their people, rather than at their expense.” He is a highly regarded speaker who has presented at thousands of events. Sykes has also consulted for major companies like Google and Microsoft.

Hanlie Van Wyk has more than 30 years of experience working across three continents; she connects the “brain, behavior and well being.” She is the Head of Research and Habit Change at the Behavioral Research and Applied Technology Laboratory (BRATLAB).

In The 11th Habit, Sykes and Van Wyk explore the transformative power of habits in the workplace. They look specifically at the ways in which habit building applies to a positive company culture—one in which employees are humanized and high-performing.

The book illuminates the habit of self care, a habit that our high-performing culture often does not value as highly as it should. The authors examine the ways in which to build a high-performance company through health, happiness, and security. They attest to the importance of positive habits in establishing a work/life balance.

A Better Financial Plan: Significantly Improve Your Finances Without the Help of Wall Street

Cash value life insurance is a lucrative investment for buyers and sellers, but naysayers and misinformation have created a difficult market for sellers—they must have the competitive edge. Dean Vangozzi was already a successful financial entrepreneur, but he found his edge when he published his book. Now, because of the credibility that’s come with the book, Vaganozzi says that he is selling more life insurance than he’s ever sold, and it’s easier than it’s ever been. 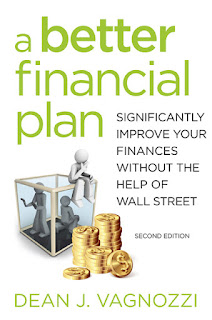 In his groundbreaking 2016 book, A Better Financial Plan: Significantly Improve Your Finances Without the Help of Wall Street, Vagnozzi makes no apologies as he sets about to “trash traditional planning.” Vagnozzi uses the book—now being published in its 2018 edition—to disrupt traditional financial planning wisdom, writing, “Nobody gets rich because of his or her 401K or IRA.”
Dean Vagnozzi is in what he calls the “alternative insurance business,” selling financial products that have no correlation to the stock market. One of the main products is cash value life insurance, and this is where the book places a lot of its focus. Although Vagnozzi has experienced exceptional success throughout this career in life insurance – since writing the book, he’s seen his success rate skyrocket as client interactions have become more effective and efficient.
Vagnozzi recalls that before he wrote the book he’d spend up to an hour and a half with new clients. After discussing cash value life insurance with them, they’d exclaim that it was a great approach and they’d never heard it explained in the way that he described it.
However, he remembers that at this point he’d set up a next appointment with clients to fill out paperwork, and the follow-up appointment attendance was disappointing. Between the initial appointment and follow up appointments, sixty to seventy percent of new clients would cancel due to negative feedback they’d heard from others about cash value life insurance. Even at this rate, Vagnozzi says that he was selling more of that product than ninety-five percent of the life insurance agents in the country.
“The sales process was long,” says Vagnozzi. “I felt like I went ten hours with Muhammad Ali. I’d get the sale, but I was beat up, bruised. I was good at it, but it was a lot of work.”
Vagnozzi chose to write the book for many reasons, including for credibility’s sake. He saw the book as the next logical step in his robust marketing campaign. Now, he says that if he’d known the success that the book was going to have, “I would have been typing with a smile on my face.”
As a result of this book, Vagnozzi’s initial client encounters are completely different. First, he introduces the purpose behind the book. “I have to tell them why it’s worth their time,” he says; so, he provides a five minute overview before giving the book to a prospective client. He finds that, as a result, clients come into his office saying, “‘Dean, the book is great. I can put ___ a month into my life insurance.” And his book of business continues to grow.
Jenkins Group assisted Vagnozzi in the publication of the book, and the experience, he says, was “fantastic.” People ask Vagnozzi how he found Jenkins Group, which is located in Traverse City, Michigan, while Vagnozzi is located in Philadelphia. Vagnozzi performed internet research on publishing companies before finding Jenkins Group; and although he stumbled on Jenkins somewhat by luck, he says, “I can’t give them any higher of a score.”
What advice does Vagnozzi have for other professionals interested in writing a book? “Don’t hesitate to move forward,” he says. “The expense of the book was made up for me thirty-fold in the clients I’ve gained.” He advises, “It’s not about selling the book, it’s about the products or services.”
How does he know that he has been ultimately successful? Vagnozzi says, “I have people call me after they read the book and ask, ‘Do you have someone who can help me implement this stuff?’” Upon hearing this, Vagnozzi knows that he’s done a good job because, evidently, the reader did not believe that the author wrote the book in order to promote his own services—rather, the reader saw the book as a helpful guide to a valuable product.
With the publication of his book, Vagnozzi has not only seen growth in his client base—he has also become a sought-after speaker. Insurance companies invite Vagnozzi to speak at conferences, and he uses these platforms to tell of how the publication of his book has helped grow and streamline his business.
1 comment: